Do you want to enjoy your holidays in the royal city of Rajasthan? Then, Udaipur is the right place where you can experience amazing palaces of the Rajput era, scenic beauty of lakes, temples, huge forts and so on. Udaipur is also a home of several Heritage Resorts in Rajasthan which offers a wonderful mixture of sophistication and comfort paired with impeccable hospitality. By booking one of the most famous Heritage Hotels in Udaipur, you can experience staying in a heritage hotel which was a former house of the Royal family.

Boutique Hotels in Rajasthan are facilitated with all kind of luxurious modern amenities to ensure their client’s comfort and satisfaction. We, at Rawla Narlai, are one of the most renowned Heritage Resorts in Rajasthan. Located between the two well-known cities such as Jodhpur and Udaipur, Rawla Narlai Heritage Resort is the perfect place to enjoy top tourist attractions in Udaipur.

Places to visit in Udaipur

There are many places to visit in Udaipur and some of these places are:

We, at Rawla Narlai, are one of the most famous Boutique Hotels in India. By staying at Rawla Narlai, which was Hunting Manor of Jodhpur rulers, you can experience a memorable tour in Udaipur including experience of Royal culture, hospitality, step-well dinner, Rajasthani Cuisine, luxurious facilities, and Udaipur sightseeing places.

Known by several monikers like City of Lakes, The Venice of the East and The Kashmir of Rajasthan, Udaipur is a major Rajasthani city and one of the most beautiful cities in India. 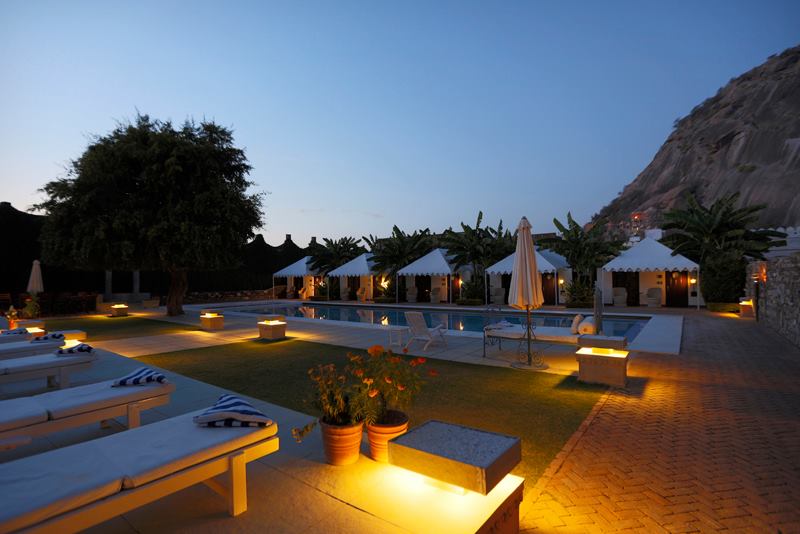 Known by several monikers like City of Lakes, The Venice of the East and The Kashmir of Rajasthan, Udaipur is a major Rajasthani city and one of the most beautiful cities in India. Bordered by cerulean lakes and the lush, green hills of the Aravalli, one of the oldest mountain ranges in the world, Udaipur was founded by Maharaja Udai Singh II in 1533 as the new capital of Mewar Kingdom.

The magical mosaic that Udaipur is, it’s inundated with fantastic palaces, havelis and temples stretching away in all directions through its narrow, crooked, timeless, old-world streets. East India Company’s Colonel James first called the city of Udaipur the most romantic spot on the Indian subcontinent.

Udaipur was also awarded the title of World’s Best City in 2009 by Travel and Leisure magazine. Boasting of many historic monuments, gardens, lakes, and museums, Udaipur is also known for its exclusive heritage hotels, all of which offer unmatched experiences and amenities to their guests. With some of the finest heritage hotels in its vicinity, Udaipur is definitely a destination to be at.

Let’s now take a look at some of the best heritage hotels in Udaipur.

1. Shiv Niwas Hotel: This crescent-shaped heritage hotel was established in the first half of the 20th century, during the reign of Maharaja Fateh Singh. While it was initially kept aside for the dignitaries of the Mewar royal family, the property was later transformed into an exquisite heritage resort. The deluxe hotel features 19 palace rooms, 8 terrace suites, 6 royal suites and 3 imperial suites. Everything apart from the 19 palace rooms is bedecked with original portraits and furniture which have been there from generations.

2. Amet Haveli: Amet Haveli was built between 1734 and 1752, under the reign of Maharaja Jagat Singh II. He is also known for being the builder of exquisite Jag Niwas, presently known as the Lake Palace. Along with numerous modern facilities, the hotel features 20 elegant suites with décor and ambiance reflecting the bygone Rajput era.

3. RAAS Hotel Devi Garh: RAAS Devigarh is an 18th century palace nestled in the Aravalli Hills. A testimony to the charms of old-world Rajputana, it’s an exemplary heritage hotel in Udaipur featuring an array of decorative styles. With an atmosphere of complete serenity, the hotel offers a plethora of recreational activities, spa and wellness treatments, multiple dining options and a wide range of suites to choose from.

4. Rawla Narlai Heritage Resort: An exclusive blend of the old and the new, Rawla Narlai is a heritage resort lying midway between Udaipur and Jodhpur. Settled in the heart of Aravalli Hills, on the foot of a granite rock, Rawla Narlai tranquil resort tucked away from the clamor of the cities. Transporting its guests into a timeless period, Rawla Narlai seamlessly merges its age-old heritage with avant-garde facilities.